Blog
You are here: Home1 / Blog2 / Guest Appearances3 / Eric on Big Think: Capitalism 2.0 Will Include a Healthy Dose of Socia... 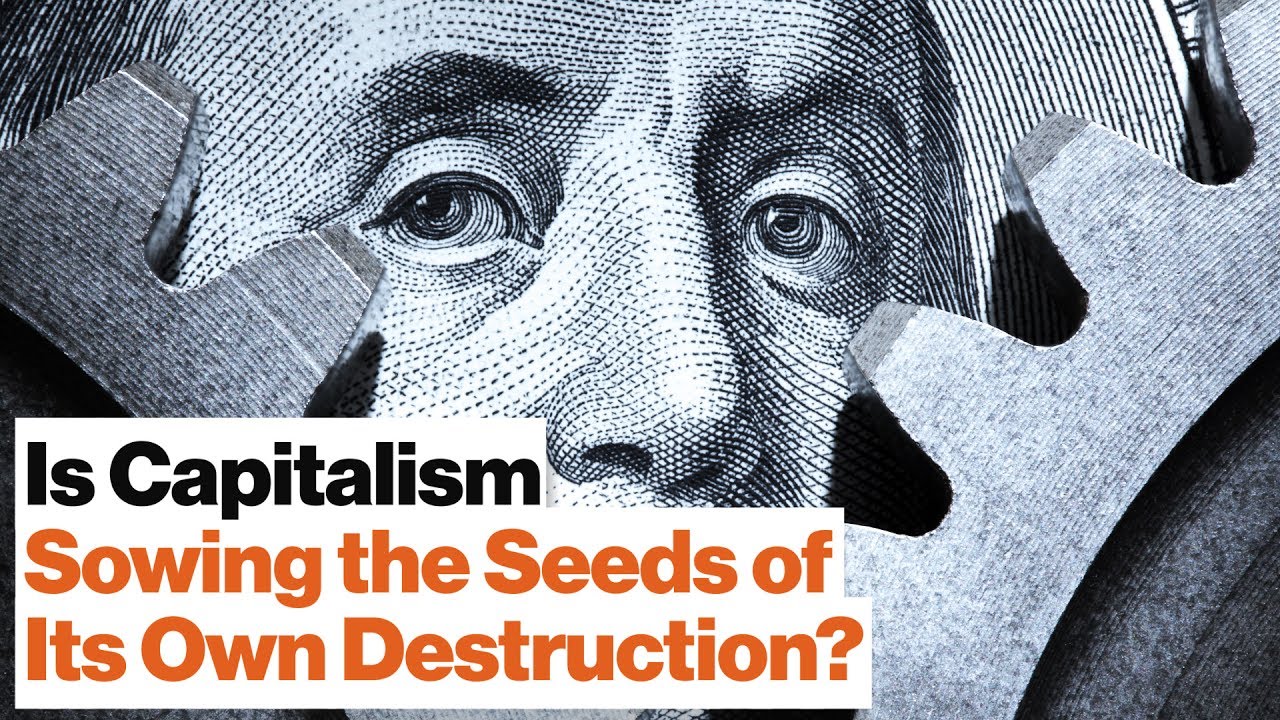 America is falling behind when it comes to leadership, and it’s pretty much directly correlated to how we value people with technical brains. They aren’t given enough power, so much of the American way of the last 50 to 60 years or so has been marginalized by middle management types. The reason, Eric Weinstein argues, is that these types don’t trust the smarter and more technical minded men and women. One example Weinstein gives is that university presidents 60 years ago might come from a physics or math background—now they’re much more likely to be middle management types who have worked their way up the ladder using charm. Weinstein also makes an extremely valid point that technical talent can build a more optimistic future. This was certainly the case in the middle of the 20th century, but has been lost by the wayside. Meanwhile, superpowers like China have the same outlook we used to and are vaulting ahead in the world using the same mindset we used to have.

ERIC WEINSTEIN: I get asked a lot about the state of capitalism and I think that for those members of society of a certain age we think of capitalism as being locked in an ideological battle with socialism perhaps or even communism.

But we never really saw that capitalism might be defeated by its own child – technology. And I think that what we find is that even the most diehard free market economists usually save place for what they call market failure.

That is, markets really only work when the value of something and the price of that object or service coincide. So the key question is: what causes value and price to get out of alignment? And, in fact, every government on earth has a form of levying taxes of some form, because at some level there are certain things that need to be paid for that cannot, in fact, be priced where they must be valued.

So, for example, raising a standing army is tough because if somebody chooses not to pay for it it’s very difficult to exclude them from the protection of that army. So that in general—what we find is that these market failures are found in every economy, but they are also hopefully a small portion of the economic activity so that we can deal with them as a special edge case.

Now the problem with this is that technology appears to do something about figuring out the size of that small slice and making it rather large. So, for example, if I record a piece of music, once upon a time if you wanted a high quality version of that music you had to go to the folks who actually pressed the record albums.

But now I can record music with arbitrary fidelity and share it as a small file. And my having a copy of that file doesn’t preclude anyone else from copying the file and using it themselves. There’s no question that the number of times I use that file doesn’t really degrade the file because it’s, in fact, digital. So in that situation musicians were among the first to feel the earth crumble beneath their feet and they had to find new business models because, in fact, they found that they had gone from producing a private good where price and value coincided to producing a public good.

And the idea of taxing people to pay for both an army and their diet of jazz and rock n’ roll probably didn’t make a lot of sense.So the danger is that more and more things are being turned into small files, and that means that the portion of the pie that is private goods is likely to shrink. This is one of several different forces.

Another one that I talked about in an essay called Anthropic Capitalism is that software has some very peculiar features.Traditionally technology has moved us from low value occupations into higher value occupations. So while we always decry the loss of jobs we usually create new jobs which are more fulfilling and less taxing.

And therefore those who have cried wolf when they’ve seen technology laying waste to the previous occupations, those people have usually just been wrong. The problem with software is that software spends most of its time in loops. Almost all code can be broken into two kinds of code. Code that runs once and never repeats and code that loops over and over and over. Unfortunately what jobs are is usually some form of a loop where somebody goes to work and does some version of whatever it is they’ve been trained to do every day. Now the danger of that is that what we didn’t realize is that our technical training for occupations maneuvers the entire population into the crosshairs of software. It’s not just a question in this case of being moved from lower value repetitive behaviors into higher ones.

But the problem is is that all repetitive behaviors are in the crosshairs of software. So it’s not that there’s nowhere to go; we still have the Rube Goldberg sections of code, where something will happen only once. You know: a company will be founded, never to be repeated. A poem will be composed that will never need to be recomposed.

When we lost the ability to beat computers at chess we immediately thought of Go as being a deeper game. But that bought us a very small respite from the power of the computer.

And I don’t even know of anyone searching for new games more human-friendly than Go to maintain our edge. So I think it’s really important to understand that where we are is that we may need a hybrid model in the future which is paradoxically more capitalistic than our capitalism of today and perhaps even more socialistic than our communism of yesteryear, because so many souls will require respect and hope and freedom and choice who may not be able to defend themselves in the market as our machines and our software gets better and better.

And this is one of the reasons why something like universal basic income comes out of a place fiercely capitalistic like Silicon Valley, because despite the fact that many view the technologists as mercenary megalomaniacs, in fact, these are the folks who are closest to seeing the destruction that their work may visit upon the population.

And I don’t know I think of any 9, 10 or 11-figure individual at the moment that I’m familiar with who isn’t worrying about what we’re going to do to take care of those who may not be able to meet their expectations with training and jobs as in previous models.

Whether it’s truck and car-driving is one of the largest employers of working age men threatened by self-driving vehicles or any of the other examples. For example: computers that are capable of writing sports stories from the scores alone.

So in all of these cases I think the technology is actually forcing those who are most familiar with it to become most compassionate. And whether or not we are going to leaven our capitalism with some communism or start from some sort of socialist ideal and realize that if we don’t find a way to grow our pie very aggressively with the tiny number of individuals who are capable of taking over operations of great complexity, I think that we are going to have some kind of a hybrid system.

I wish I could tell you what it was going to look like but the fact is nobody knows. Universal basic income is very interesting but is clearly a first step and I would say really a first draft of a part of a theory that we just don’t have yet.

It’s hard to say whether I’m optimistic about the future. I’m very confused as to why our government is still populated with so many soft – let me try it again. Honestly I’m rather confused about whether to be optimistic or pessimistic. One of the things that I find most perplexing is that our government is still populated by people who come from sort of softer disciplines if you will. Whether that’s law, whether these people come from poli-sci, very few people in government come from a hard core technical background. There are very few senators who could solve a partial differential equation or representatives who could program a computer.

And I think that this is really a terrible inversion of what should be happening. As the world becomes more technically demanding it’s important that the children of engineers, mathematicians and scientists grow up with the children of politicians or executives.

And what we’ve seen is we’ve seen this terrible economic stratification where the technical professions were turned into support roles for this different leadership class.

Now during the 50s, for example, we would have university presidents who might come from a physics background such as we had at the University of Pennsylvania. The atomic bomb came out of World War II, as did radar. We came to understand the incredible power of computers like ENIAC and during that period of time there was a tremendous vogue for thinking of a technical intellectual elite that could, in fact, lead us into a more hopeful and technological scientific tomorrow.

Somewhere along the line that got lost and I’m very concerned that we have the technical talent to build an optimistic future, but that what for whatever reason we’re so terrified now of those technical folks that we keep attempting to subordinate them, to keep them on a leash, to make sure that they are not the ones in the know with power, with decision-making abilities.

And I think that if you look at a society like China’s, China’s certainly not falling for this trap and they are proceeding along a very different path.

So I think whether or not we understand where we are and we make the correct decisions for the optimistic future depends as to whether we have the right leadership class. Do we view our technical people as support staff for the true decision-makers or do we realize that, in fact, these are the people who should have been making the decisions all along?

I think if you think about, for example, the Challenger disaster it was the management class that didn’t understand the real risks. The engineers knew just how much risk was being taken. And I think that, in fact, if we could just invert that relationship we’d have a much better chance at an optimistic outcome.

The Portal Podcast #014: London Tsai – The Reclusive Dean of The New Escherians

Eric on Big Think: AI Can Now Self-Reproduce — Should Humans Be Worried?

The Importance of Taste

Trump, Mathematics, and the ‘Thinkuisition’ | Eric on The Rubin...
Scroll to top