Blog
You are here: Home1 / Blog2 / Guest Appearances3 / Eric on Rising with Krystal Ball & Saagar Enjeti: How To End The Business... 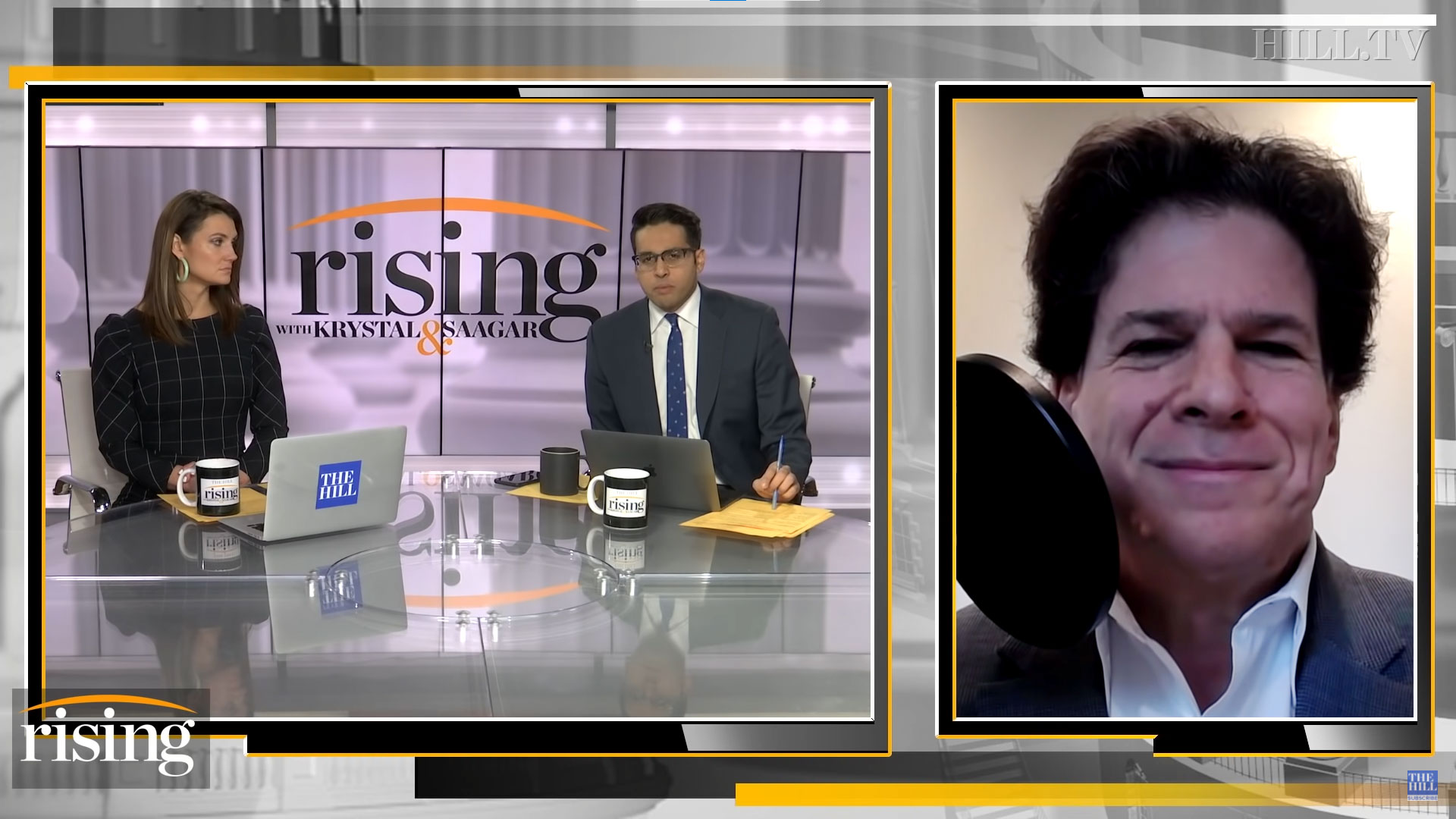 Managing Director of Thiel Capital, Eric Weinstein, discusses how we can heal the country after a tumultuous year.

About Rising: Rising is a weekday morning show with bipartisan hosts that breaks the mold of morning TV by taking viewers inside the halls of Washington power like never before. The show leans into the day’s political cycle with cutting edge analysis from DC insiders who can predict what is going to happen. It also sets the day’s political agenda by breaking exclusive news with a team of scoop-driven reporters and demanding answers during interviews with the country’s most important political newsmakers.

00:00:00
Krystal Ball: The pandemic, of course, continues to rage. We’ve got millions of people in fear of losing their homes, losing their jobs, we’ve got threats of more violence by extremists here within this own country. The country is clearly on edge. If there was ever a time when we needed a reconciliation and healing, it is right now.

00:00:16
Saagar Enjeti: That’s right. So joining us now to talk about how to achieve that host of the portal podcast, Eric Weinstein himself. Dr. Eric Weinstein, great to see you, sir. Thanks for joining us.

00:00:28
Saagar Enjeti: Absolutely. Eric. It’s something you and I have spoken a little bit about. And one, we wanted to make sure you got the opportunity to talk about it here on Rising as well. In the events of everything, what do you see as a way that this country can come together in light of, just, historic division.

00:00:44
Eric Weinstein: More or less, those of us who have a business model that is based upon dividing the country have to realize that we are about to saw off the branch on which we rest. So what you see is we’re liquidating our business models for the United States. And effectively, the apocalypse is going to be great television, so we’re all super excited to see it. And all of us have an exaggerated sense of importance. And it’s time to recognize that this is the moment where we either continue in what I would call Kayfabe, which is the system that professional wrestling uses to manage layered lies and deceptions. Or we get back to being the United States of America. And really, the choice is ours. And I think the key issue is that only a tiny number of people have tried to call balls and strikes, as opposed to demonizing one side from the other.

00:01:34
Krystal Ball: Yeah. And so be a little more specific when you say those of us who have a business model built on dividing the country, who specifically are you talking about, are you just aiming at the media or are there other people that you’re thinking of as well?

00:01:47
Eric Weinstein: Well, I particularly try to discourage audience members. I shrink my audience size by trying not to appeal to the limbic system, but going straight to the prefrontal cortex. And that’s what a lot of us used to do, whether it was the MacNeil Lehrer NewsHour, back in the day, or even network television news in the days of Eric Sevareid. In essence, what we have now is we have a limbic business model, and there’s nothing better than feeling that you are a part of an exciting team on a conquest to save the country for the good of the world. And it’s going to come as a huge shock that there are two cults which I’ve called Wokistan, and Magastan, and that neither of these things is particularly serious. They’re both capable of taking the country down. And the key issue that we face is that the kleptocracy in the center between the left and the right is sponsoring this exciting live action role-playing event, as we saw from the events inside the Capitol, where people LARP their way to an early death, in particular, a veteran from San Diego who walked right into a bullet clearly feeling that she was invincible, as if she was part of the Boxer Rebellion.

00:02:52
Saagar Enjeti: So let’s talk about that era, which is that what you described there is really the complicity of the leadership class. They’re the ones who got us to where we are, and they’re almost certainly the ones that can’t get us out. So when people are interested in actually getting something done, what is there to be done if the current system is so rotten?

00:03:10
Eric Weinstein: Well, first of all, let’s just recognize that in previous eras, that people born in the 1940s would be embarrassed to try to continue running the country. We used to have mandatory retirements before the 1980s. And in part, it’s necessary to renew your society, we are living in a technological age. I think if you had minimal technical requirements for the people who were part of our leadership class, or minimal honesty requirements, keep in mind that Donald Trump is clearly very sophisticated in the fact that he has incited a group of people to pressure him to win the election using the same technique that Henry II used to get rid of Thomas Beckett, which is called “Direction Through Indirection.” Somehow that’s confusing our talking heads, I don’t understand why. On the other hand, on the other side of the country, we have a mayor Ted Wheeler with an imaginary organization that firebombs a very real courthouse, and depending on whether it exists or whether it doesn’t, whether it’s allowed to direct traffic, or treated like an enemy has to do with where we are in the electoral cycle. None of these people are workable. And effectively, we have to remove three groups, the center, which has turned kleptocratic, an extreme Left group which is trying to get Marxism through identity politics, an extreme Right wing group that wants to return us to some era, which most of us are pretty happy that we’ve moved beyond. So I think it’s also really important to realize that many of us are captured by these cults. And we’re still good people, we’re just running really bad software. And the same thing you have to do when you have a child that succumbs to a cult. You’ve got to go in there, and deprogram and get them out with love. And very few people are in a position to say, “Hey, I love you and I understand why you joined, because there was a kernel of truth around everything that you were doing.”

00:04:57
Krystal Ball: Yeah, well, and it seems like there’s a real collective action problem here too, because all the incentive structure is to be the loudest, most aggressive, most, you know, out there member of the cult. That’s what gets you promotion. That’s what gets you social media love. That’s what builds your audience. That’s what really contributes to your esteem within your particular tribe, and any one person sort of de-escalating and coming back to reality, they’re just going to, they’re just going to disappear. Right? It’s against all of their interest to do that. So how do you deal with that collective action issue of when you need everybody to basically take a step back?

00:05:35
Eric Weinstein: Well, I don’t think it’s a question of “everybody”. I mean, one of the reasons I asked to appear on Rising is that you guys aren’t following that model, and you’re crushing it. And I’m not following that model, and I’m crushing it. Now, I’m a 55 year old father of two, with a math PhD and I get recognized in mattress stores, you know. The country is hungry for reality. We are a reality-starved people. And what we need to do is, you guys were very smart to decamped from inside what I call the Gated Institutional Narrative, it’s time to take it back, because the institutions only listen to their own media. And right now, what we’ve got to do is we’ve got to reinsert the critics who are still capable of independent thought, enormous audiences, who are showing that, in fact, the amygdala is not the business model of the future. It is the prefrontal cortex. You guys wouldn’t be doing this well, if you were appealing to the amygdala. Most people are fatigued and exhausted. And it’s time for you guys to lead. I mean, I think that you guys are much more in the future. I’m here to be a handmaiden to help you get there. The reason that Rising is so important is that it has the optics of the Gated Institutional Narrative. You guys look like what they have to listen to. I’m just a guy on a Skype call with an anonymous wall behind me. But because of some production values, the amygdala accepts that you guys should be talking to the prefrontal cortex. And by the way, what an amazing job you guys are doing. And by the way, Krystal I’m very sorry, but your own show completely disproves your question and its assumptions.

00:07:07
Saagar Enjeti: What a pleasant way to end this conversation. Eric, thank you so much for joining us. We really appreciate your words at this time. I think they’re very important.

00:07:18
Krystal Ball: Coming up Joe Biden’s gonna need bipartisan support for his COVID relief plan. In front of the show, David Sirota is going to explain why his approach may not work out. That’s when Rising continues.

The Portal Podcast #003: Werner Herzog – The Outlaw as Revelator

The Portal Podcast #018: Eric Weinstein (Solo) – Slipping the DISC: State of The Portal/Chapter 2020

The Importance of Taste

Eric on Big Think: Why Can’t We Find the Theory of Everything? Einstein, Rogue Genius, String Theory

Eric on The Glenn Beck Podcast
Scroll to top